The beauty of the Internet is how interconnected it’s made humankind. You can literally browse the whole word from the comfort of your bedroom – and this has had an enormous affect on global tourism.

Travel used to be seen as a sometimes dangerous, arduous process that involved a great deal of risk. Sure, travel can still be a risky proposition – especially right now when there’s a global pandemic – but the Internet has made travel more accessible than in any other point in human history.

Don’t speak the language? Google Translate and Microsoft Translator are free. Need somewhere to stay? Services like Airbnb, CouchSurfing and Expedia make it easy to find accommodation, even on a shoe-string budget. You get the picture.

One of the most valuable tools the Internet has blessed the modern tourist with are review sites like TripAdvisor that not only allow you to compare the prices of everything from hotel rooms to theme park tickets but also serve as platforms where users can share candid reviews about their experiences – so that you avoid the risk of ‘going in blind’. The big social media sites like Google and Facebook have got in on the action too, which collate reviews of everything from cities to restaurants to even geographical features. And this is where the silliness comes in.

Google ‘the Mediterranean Sea’ and you’ll see that the famous body of water has a 4.6-star rating from over 36,000 Google Reviews. Which begs the question: why? Or more pertinently, who? Who on earth reviews a f*cking ocean?

Dig through the reviews and you’ll see that a good portion of them pose that very question, as well as many aspiring comedians quipping about how the sea is “too salty” or has “too much water”. One reviewer put it best: “we’re reviewing a sea, soon we’ll get to review the Earth.” 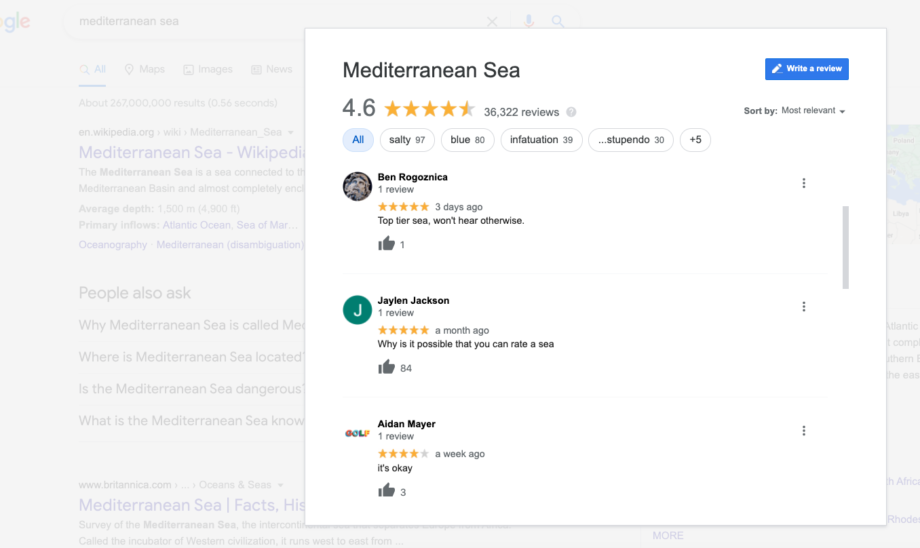 “It’s okay” yet you gave it 4 stars. Rather generous.

This may seem trivial but it reveals an annoying truth about travel in the 21st century: all this extra information doesn’t actually help us.

Online review sites seem like a democratic, elegant solution but in reality, they’re incredibly flawed. The wisdom of the crowd can sometimes result in a useful conclusion but often it results in a bunch of ill-qualified people talking about something they don’t know anything about. Because there’s no vetting, anyone can have their say, even people who haven’t even experienced the thing they’re reviewing. Case in point: more than a few of these aforementioned bedroom comedians…

Restaurant reviews are perhaps the best example of this, as people online regularly give restaurants poor ratings out of entitlement, ignorance and spite. Was the food actually rubbish, or was the waiter not quick enough to your liking? Is that really an objective review of the experience? On the flip side, there’s also the phenomenon of ‘astroturfing’ to contend with, where sponsored or unobjective positive reviews masquerade as genuine grassroots support.

Unrestricted review services that let anyone post a review are also magnets for trolls, as well as entirely unrelated discourse. Something that’s quite heartbreaking is that more than a couple of the positive reviews of the Mediterranean Sea are from refugees desperately trying to attract attention to their plight. Make of that what you will.

What this all means is that despite this wealth of knowledge, you can’t really trust it all completely. It’s why old-school offerings like Lonely Planet or Michelin guides still remain relevant and popular: they’re objective, concise and authoritative because they’re written by people who actually know what they’re talking about. A groundbreaking concept!

At the end of the day, online reviews can still be a useful source of information for the budding tourist. But don’t take anything for gospel: do your own research; compare and contrast different reviews and platforms; go forth with an open mind. Oh, and if you’re going to leave a review, make it a useful one.