Comedians aren’t known for being paragons of style, but Kevin Hart is a notable exception.

The 41-year-old Philadelphia native is not only one of the most successful funnymen on the planet, but he’s also one sharp dude. From his expansive watch collection to his on-trend taste in summer attire, the talented entertainer is a consistent source of style inspiration – especially for shorter men.

Hart is famously a short dude and regularly jokes about his short man status in his films and comedy routines. It’s hard to figure out exactly how tall he really is (he’s given out a wide variety of figures over the years, everywhere from 5’2 to 5’5) and many different online outlets have had a go at measuring him up.

His exact height isn’t what’s important though. What is crucial is how he doesn’t let his height hold him back from being one stylish gent – or rather, he knows how to dress to his height. That’s the big secret to his sartorial success.

Case in point: these promotional shots he uploaded to Instagram last weekend, where Hart showed off his keen eye for suiting… While casually flexing a pair of Patek Philippe Grand Complication watches collectively worth around $300,000. No biggie. 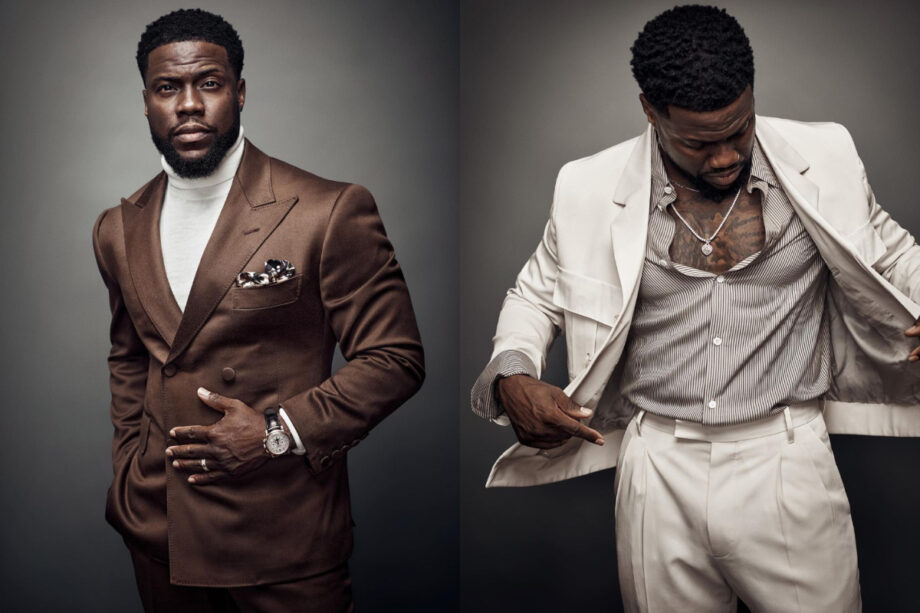 Hart’s two watches are the ref. 5270J and the ref. 5270P – both part of the luxury Swiss watch brand’s top-tier Grand Complications collection and both around $150,000 a pop. The 5270J has a yellow gold case and a silvery opaline dial with gold applied hour markers, whereas the 5270P has a platinum case and a golden opaline dial with blackened gold applied numerals. They’re otherwise identical, featuring perpetual calendar and chronograph complications; day, month, leap year and day/night display in apertures; dedicated date and seconds sub-dials and both presented on an alligator leather strap.

What’s really important here is the clothes he’s wearing, however. Hart shows off two different formalwear looks, both of which look incredibly crisp and both do a fantastic job of distracting from his height. Something yours truly noticed (and wrote about) on Monday.

“The first look, a mahogany double-breasted suit over a white turtleneck, is incredibly dapper whilst not being overly formal. The turtleneck adds a bohemian touch, but also makes him look taller than he is. As a fairly broad, built guy, the double-breasted suit jacket is a savvy move – a skinnier man couldn’t pull it off. His gently bedraggled pocket square is another clever touch. All in all, he looks like a million bucks, or rather, 200 million bucks, which is what his net worth’s been calculated as.”

“The second look is even more casual, while still remaining smart. His alabaster safari jacket is less structured but still well-tailored – a must if you’re a shorter dude looking to appear taller than you really are. Rolling back his cuffs and popping some buttons to expose his chest tattoos and a pair of silver chains, Hart looks like he’s ready to swap hemispheres; it’s a very summery fit.”

Just two days later, Hart took to Instagram with yet another suave outfit, this time throwing a plain white tee, Diors, grey pinstriped pants, a grey beanie and the following caption into the mix:

“Haters will say that I’m not tall…”

Coincidence? You be the judge. In any case, Hart is looking damn fine. If you want some more pointers on how to nail smart casual like him, check out our comprehensive guide.