Dan Bilzerian makes us ask all sorts of questions. Is he a soulless shill or a man of the people? Should we admire his radical honesty or condemn him for pandering to ‘base’ desires?

Whether you see him as a brave middle finger to America’s religious conservatism or a 40-year-old man living out the puerile fantasies of a teenage boy, there’s one thing you can’t criticise Bilzerian for: his Instagram consistency.

Why? If the day ever comes when one of Bilzerian’s posts does not include guns or buns, you can rest assured the end is nigh. On that note… Bilzerian just ‘Karen baited’ the internet into giving him yet more publicity for his upcoming book, posting the following image to Instagram, then deleting it. 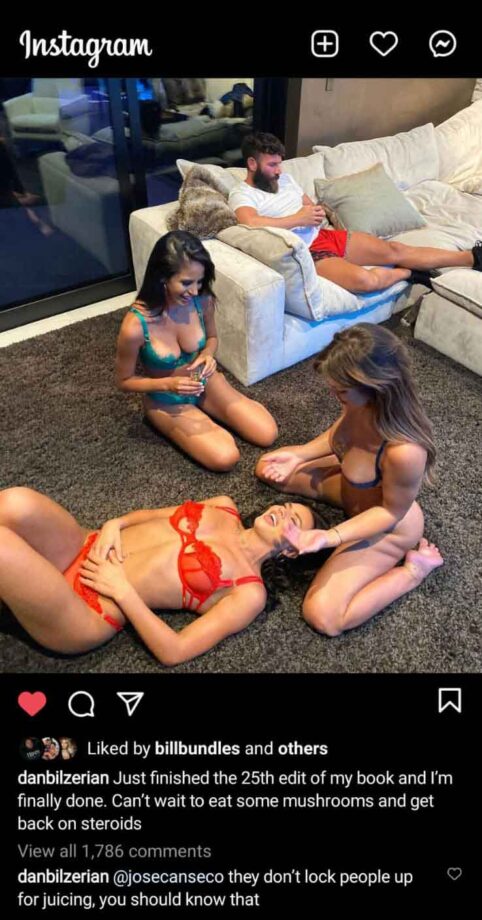 “Just finished the 25th edit of my book and I’m finally done. Can’t wait to eat some mushrooms and get back on steroids,” Bilzerian captioned the post.

It appears he doesn’t quite have Hunter S. Thompson’s capacity for drug consumption.

Time will tell if his efforts pay off. Bilzerian is yet to announce a release date for his book, which he is self-publishing, after he parted ways with his publisher in 2020.

According to the NY Post, Bilzerian had a publishing deal set up with Simon and Schuster, which went up in smoke, according to one of their sources, because Bilzerian was too busy with his hot tub friends to actually write the thing.

However, a rep for Bilzerian told the NY Post it wasn’t like that. “[Simon and Schuster] finished a ghost-written book which Dan wasn’t happy with,” said the rep, “so he returned the advance and wrote the book himself — no ghostwriter — and he intends to self-publish.”

As for the steroids claim, if he isn’t simply trying to garner publicity, Bilzerian would be far from alone in the habit (though he’d certainly stand out a mile when it comes to admitting it).

As DMARGE has previously reported, nailing down an exact figure in relation to the number of people who admit to taking steroids is like drawing blood from a stone, although, in Australia at least, only between 0.1% – 0.8% of the population are believed to have dabbled with the performance-enhancing drug.

RELATED: Want To Get Big Quickly? Steroids Will Do The Trick…But At What Cost?

The potential side effects of steroids are well documented, and these alone should be enough to deter any wannabe muscle mountain (testicular shrinkage and man-boobs? No thank you). But just in case you needed any further warning against using them, German bodybuilder Jo Lindner recently published a video to his YouTube account that offers some brutally honest advice from life experience.