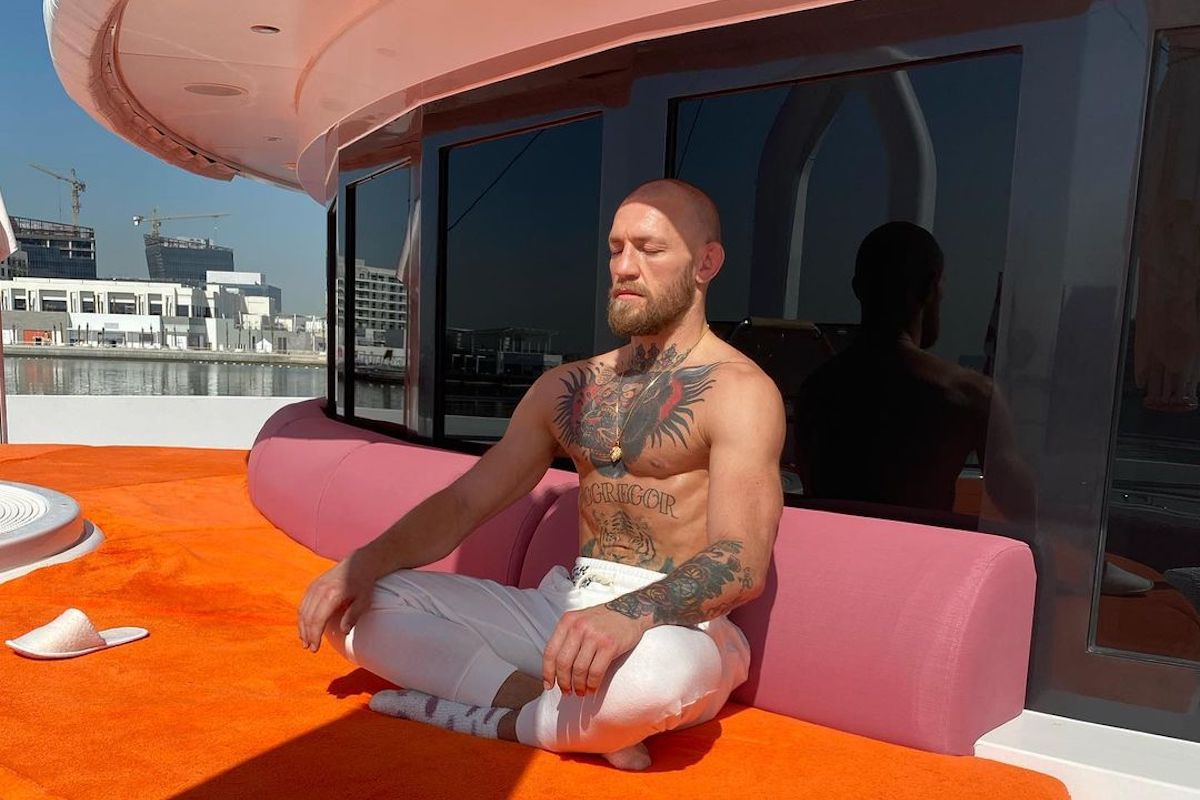 To quote Michael Douglas as Gordon Gekko in 1987’s Wall Street, “greed, for lack of a better word, is good.”

Maybe he was onto something? While the 1% have stresses that the rest of us lowly peons don’t have to worry about, those inconveniences are often outweighed by their ability to not sweat the little stuff. From being able to justify tomahawk steaks for breakfast to shrugging off driving fines in dickhead fashion, things are just easier when you have boatloads of cash.

Speaking of boatloads, that’s where millionaire MMA legend Conor McGregor has found himself: meditating on the upper deck of a superyacht in Abu Dhabi ahead of his next big fight. They say money can’t buy happiness but it seems it can buy you inner peace, which is basically the same thing.

The yacht, M/Y Moonlight II, is an almost 100m-long luxury leviathan, which can accommodate up to 36 guests in 18 rooms and boasts a helipad, movie theatre, wine cellar and a health club with sauna, steam room and gym – the latter of which we assume McGregor’s been taking full advantage of to prepare for his fight.

Charter prices start at €645,000 per week + expenses (that’s over 1 million AUD), with options such as a fleet of jet skis or diving equipment available for an additional fee. That’s chump change for someone like McGregor, who’s worth over 62 million AUD according to Forbes. And that figure is set to balloon come next week, too.

The Irishman is set to face American brawler Dustin Poirier in the main event of UFC 257 at ‘Fight Island’ in Abu Dhabi on the 24th of January: the first fight Conor’s had in a fair amount of time, and the first time he’s fought Poirier since they faced off back in 2014. McGregor has a disclosed purse of $5m plus a share of the pay-per-view profits, with The Independent estimating that he could be set to make around $20m.

Maybe he’s not meditating and instead just daydreaming about the huge prize packet headed his way. It brings to mind another quote, this time from D-Ruff on Snoop Dogg’s 1994 single Gin and Juice: “Laid back (with my mind on my money and my money on my mind)…”

Thankfully you don’t need to be a millionaire to work on your mental health. Read our guide on how to take a mental health day like a champion without having to beat people up for a living.