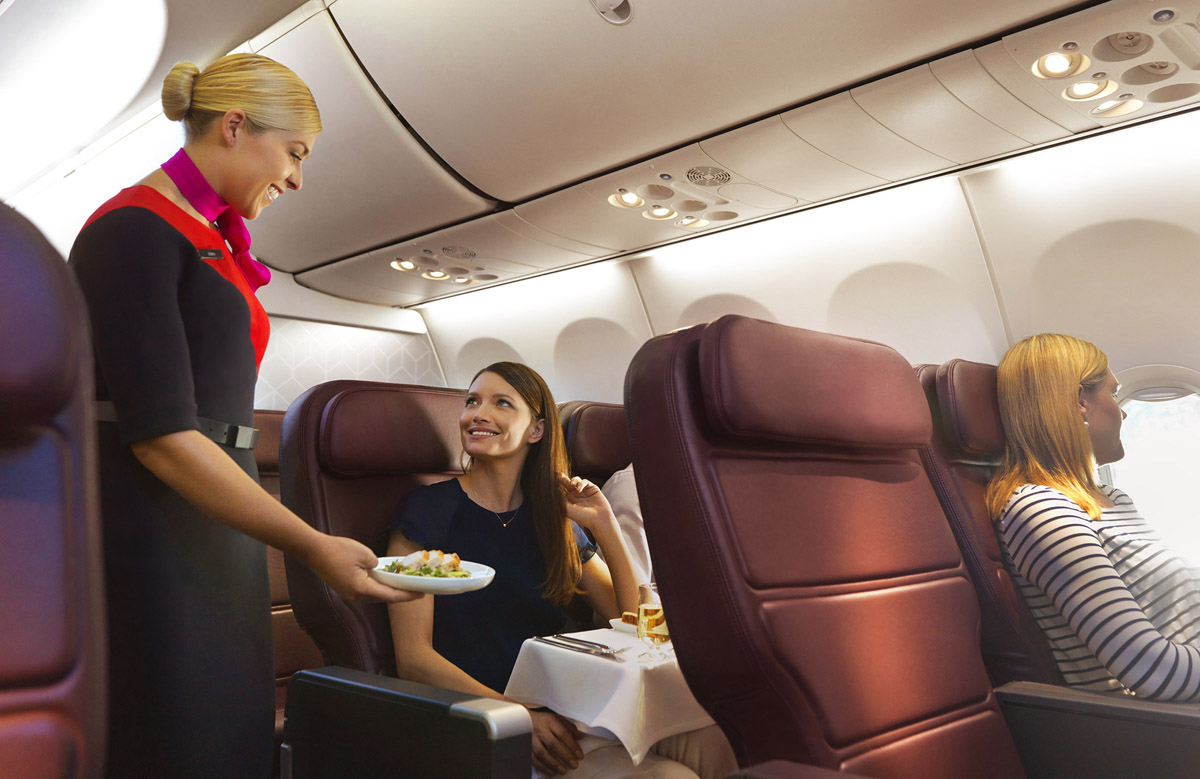 When it comes to footwear, formalwear or The Queen’s English, Australians are endearingly relaxed. But lord help any airline that aggrieves Aussie business class flyers.

As we discovered last year, Australian pointy end flyers despise disappointment. While you could write this off as snobbishness (maybe fliers should give airlines more leeway because of the pandemic?), you could also look at it another way.

You could see it as an admirable refusal to ever have the wool pulled over one’s eyes. A smart way to keep airlines in check. Common sense, even. Now, before you throw your United MileagePlus card at us, or soil your linen pants with rage; a disclaimer.

We’re well aware holding business class to a high standard can come across as irritatingly pedantic, or involve brewing a storm in a two-minute noodle cup.

We’re also well aware Australia has a much smaller domestic aviation market than America, with just two main competitors (one being now far more dominant), and the vast majority of the remainder of flight options comprising of these two competitors’ (Qantas and Virgin Australia’s) subsidiaries.

America has a more cutthroat scene, which lends itself less to luxurious domestic seats, and more to commercial competition (not to mention crushed kneecaps; passenger altercations). Indeed, there’s no such thing as business class domestically in the US, with plane sections being broken into economy and first (first being the rough equivalent of Australian business class).

Australian business class passengers’ fear of this dynamic making its way across the pond was demonstrated various times last year.

Virgin Australia’s transition to a leaner, meaner airline (post voluntary administration) had Australian business class passengers nervous, furious and teary all at once, with tributes to its domestic business class – a favourite in everyone’s book – rolling in (when news broke it could be on the chopping block).

Then there were Qantas’ repatriation flights. Though many whinged there weren’t enough of them, others argued they prove why it’s so important to have accountable airlines which, cheesy as some of the advertising campaigns are, use being “quintessentially Aussie” as a marketing tool (and then feel the heat to help out in moments like pandemics).

Finally; ‘Noodlegate‘. How could we forget? Arguably the turning point when people really started talking about “the Americanisation of business class” in Australia.

“I think Bain is on a cost cutting spree and these days you can get away with almost anything in the name of Covid.”

“Virgin used to have (in my opinion) the world’s best domestic business class product in terms of food, service and seats. Now we’re seeing the ‘Americanisation’ of business class.”

“Aussies are used to getting better so it’s no wonder the Bain ‘budget carrier’ approach won’t go down well unless the prices of the tickets reflect the actual service.”

Virgin Australia quickly rectified the situation (they claimed to have run out of food the day this happened) and are now serving snack boxes including baked Lavosh crackers (with a new and improved “challenger” menu to Qantas still to be revealed).

Check out the clamouring for memorabilia – and the outpouring of grief and nostalgia  – we saw when Qantas retired the Queen of the Skies last year. We rarely see an American airline go to such elaborate lengths to appeal to customer’s historical sensibilities either (see: ‘Secret Message Behind Qantas’ Last Ever 747 Flight’), and – as far as we’ve seen – there is rarely such a response from customers in return.

Then there are articles like the following (which describes one passenger’s disgruntled experience of “15 hours in the worst seat in A380 business class“), which show Australians maintain their high standards even when soaring internationally on non-Aussie airlines.

Looking to the future of Australian aviation, Rico Merkert, USYD Professor of Transport and Supply Chain Management, told DMARGE late last year he believes Virgin Australia will continue to transition to a middle-market carrier, while Qantas will mostly stay business as usual (though not necessarily immune to cutbacks).

“The new CEO of Virgin will position to airline closer to the LCC business model and passengers (say business) will be able to add extra services to their seat a la carte and will be expected to pay for those add-ons.”

“As such, you could argue that Qantas has won the business traveller market in the domestic Australian market. There may be a little bit of competition with Rex and Alliance though and to some extent even with Virgin as some corporate travellers may now at least initially be price sensitive.”

“International[ly],” however, Merkert told us, “it is a totally different picture as Qatar, Emirates, Singapore Airlines, Air New Zealand and a few others pose strong competition to Qantas, in particular as they are currently flying in and out of Australia while Qantas is not.”

What’s next? Watch this (air) space.