Last year an HSC question sparked a war of wands between the nation’s baristas.

Besides the chocolate sprinkles, what’s the difference between a cappuccino and a flat white? The question has prompted debate among bean burners all around the country.

“Students taking a Hospitality Food and Beverage exam… were asked to assess a diagram of two different caffeinated drinks and correctly name the coffee,” The Morning Bulletin reported. 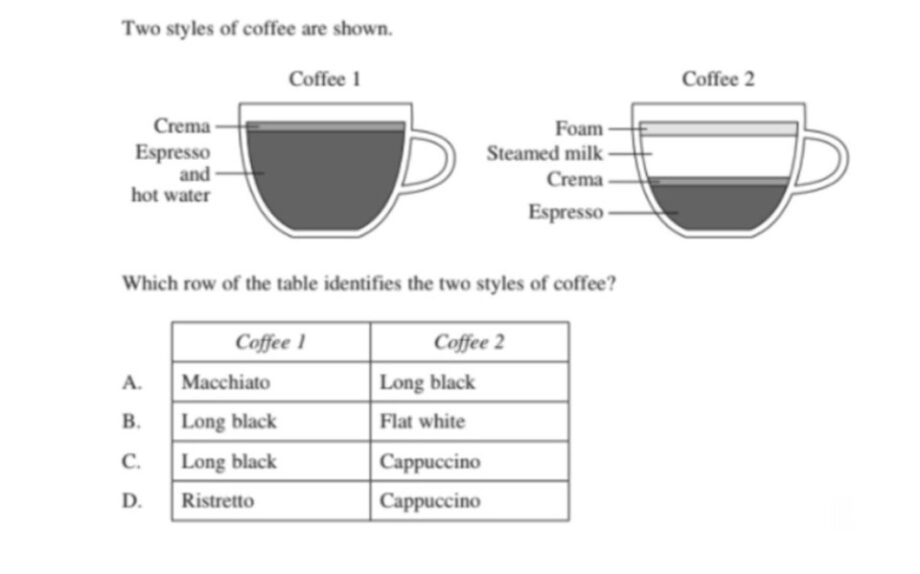 “The first diagram showed a cup with espresso and hot water, topped with a small amount of crema which everyone agreed was ‘obviously a long black.’”

But the second drink, which showed a cup that had espresso, crema, steamed milk and foam, had experts divided.

Australian Specialty Coffee Association president Kieran Westlake told The Daily Telegraph that based on local coffee culture the drink would be a flat white – but elsewhere it could easily be classed as a cappuccino.

However, other baristas said the right answer was ‘cappuccino,’ because a flat white wouldn’t have foam.

The debate ignited online, with internet commenters fanning the flames.

One wrote: “It’s a flat white. The layer of steamed milk is not foam. The foam layer on top is very thin (flat)… The foam layer for a latte or cappuccino should be about 10mm.”

“If someone served me that and I had asked for a cappuccino I’d send it back.”

Australian barista champion Matthew Lewin told DMARGE: “It’s an interesting proposition. I assume inferring the ‘chocolate sprinkles’ on top is the difference here compared to the rest of the world?”

“Cappuccino originated in Italy, named after monks with their robes. Typically in Italy the cappuccino is characterised via a thick dense layer of foam continued here in Australia – difference is we’ve added chocolate sprinkles on top.”

“Choci on top has become a staple identifier of cappuccino in Australia yet more specialty coffee roasters and shops are refraining from this addition,” Lewin added. “Easily understood [as] it can mask the nuance of what makes the coffee ‘special’ with subtle elements from the farm overshadowed by after-market chocolate dusting.”

“Yes sprinkles are delicious, yet the question is does it speak to specialty coffee’s truest core values and message…? We’ll let customers, roasters, baristas decide that one.”

Finally: the big question. Is a cappuccino just a flat white with chocolate sprinkles?

“Short answer – No. Long, technical answer – cappuccino is a stronger drink than a flat white when compared in same cup, as a cappuccino traditionally has more foam, which equates to more real estate in the cup (mostly air space) hence less milk resulting in stronger espresso to milk ratio. This equals a stronger drink.”