2020 is almost over, but we’re not out of the woods yet. With The Bat Kiss (and the economic devastation it’s heaped on us) still ravaging the world, the start of 2021 is looking to be just as uncertain as the rest of this year gone past.

While virtually all industries and sectors of the Australian economy have suffered this year, a particular loser has been the airline industry. Australia has some of the toughest travel restrictions in the world: not only are Australians virtually forbidden from leaving the country right now, but even domestic air travel has been severely reduced thanks to border closures and the prospect of hotel quarantine deterring travellers.

With Qantas’ international fleet still grounded and Virgin Australia still on shaky ground, the industry is holding its breath. Clearly, some blue sky thinking is required to help the Australian airline industry get back on its feet – and there’s one bizarre aviation story from the 90s that, if we look past its superficially absurd nature, could be a shot in the arm for Australian airlines.

In the 80s and 90s, airlines and transportation agencies around the world started seriously clamping down inflight smoking, something that previously used to be common on both domestic and international flights. Two Florida businessmen, frustrated by domestic smoking bans, decided to do something about it, and started an airline imaginatively called Smokers Express.

The airline originally intended to fly to 11 different US destinations including Houston, Las Vegas and New Orleans, and as you can probably guess, would allow you to smoke as much as you like on flights. On top of that, they even planned to hand out free cigarettes, ashtrays, headphones and lottery tickets; serve “real food for real people”, such as proper hamburgers, pizza, and steaks; and promised no screaming babies by restricting flights to only those 21 and older.

But focusing on the almost cartoonish, ‘Mad Men’-esque pitch of Smokers Express would be to miss the real genius of the airline, which was in their business model. 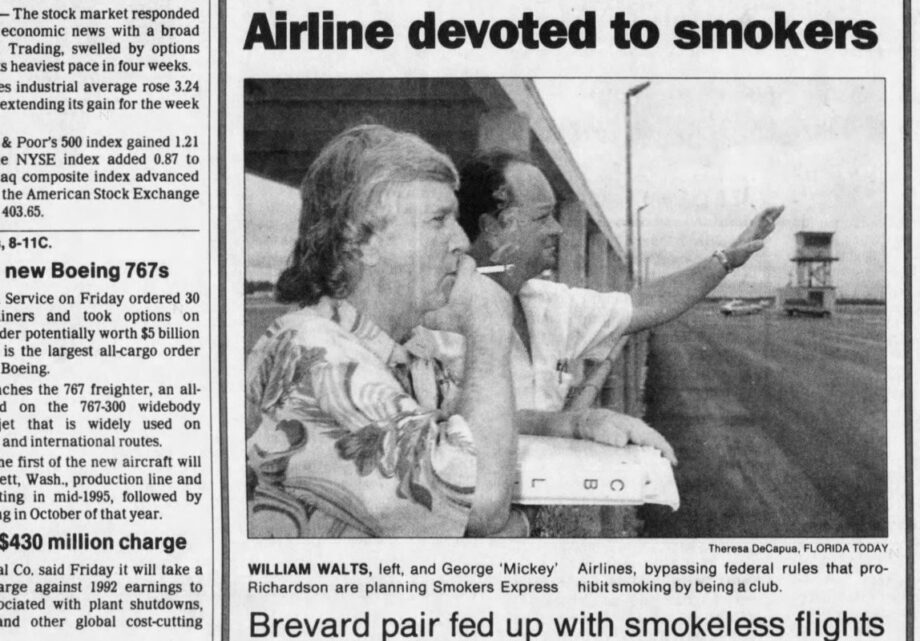 In order to get around the Federal Aviation Administration’s restrictions on inflight smoking, Smokers Express was intended to be a membership-based airline, technically making it a sort of travel club instead of a traditional airline. Customers would have been required to join and pay a $25 yearly fee, which would have funded the airline.

That’s the kicker: the idea of a membership model for airlines. It’s a novel concept and one that could be a gamechanger for struggling Australian airlines.

Picture it: you pay an annual membership fee to an airline in return for cheaper airfares. It’s a win-win: the airlines get money up-front (which might help them weather industry-destroying events like a global pandemic) and you don’t have to spend countless hours messing around on airfare comparison websites in order to find a cheap ticket.

So why didn’t Smokers Express succeed? In the end, they went up in a puff of smoke because they didn’t spend any money on advertising and weren’t able to secure enough membership money to get them off the ground… But if an airline that’s already properly established started their own yearly membership or subscription program – and supported it with advertising and capital – it could actually work.

This sort of funding model is hardly alien when it comes to the travel industry. Timeshares have been a gamechanger for money-savvy holidaymakers ever since they became widespread in the 60s and 70s, and ridesharing businesses like GoGet also operate on a membership model. Hell, Qantas already offers an airport lounge yearly membership program. Why not do the same for flights?

Another good comparison is Costco, the world’s second-largest retailer and largest warehouse club. The lion’s share of Costco’s profit margin actually comes from their annual membership fees as opposed to on the goods they sell. It’s a business model that could work very well for airlines: keep overheads down, lock customers in, and benefit from word-of-mouth advertising.

Of course, Smokers Express didn’t succeed, but the idea could work if you focused more on cheap airfares than skirting anti-smoking laws. It’s a pie-in-the-sky idea for sure, but if 2020 has taught businesses anything, it’s that you need to be innovative.

The other idea that Smokers Express had was to offer advertising on the sides of their planes, like buses or Formula One cars. But that’s a whole other discussion…

Things are still looking grim for Australian airlines. According to Health Minister Greg Hunt, the Australian overseas travel ban is expected to be in place until 17 March 2021. Qantas has also announced that they are requiring passengers to have had the COVID-19 vaccine if they want to board an international flight – and seeing as the vaccine rollout hasn’t started yet, things are still up in the air. No pun intended.