Superheroes are cool, but there’s no superhero cooler than Batman. That’s just a fact.

While he did go through a camp phase in the 60s, Batman has always been contrasted as both a character and a series due to its grittier tone focus on realism, and ironically because Batman has no superpowers – he outwits his foes through a combination of gadgets, intelligence, unaugmented physical strength and sheer willpower.

It’s this version of Batman that looms large in the public consciousness, in no small part thanks to Christopher Nolan’s blockbuster Dark Knight film trilogy, which revolutionised the superhero genre. Christian Bale’s version of the character is for many the quintessential Batman: stoic, physically imposing, with a bunch of highly-realistic gadgets at his disposal.

The Batmobile in the Dark Knight trilogy is particularly cool: not only does the ‘Tumbler’ resemble more of a tank than a Chevy Corvette, but its two front wheels can also be ejected and turned into a motorcycle: the ultra-minimalist Batpod. It’s this version of the classic ‘Batcycle’ that looms large in many people’s minds, and kids (as well as big kids) around the globe have daydreamed about driving one.

But one Melbourne man turned his dreams into reality – building a real-life Batpod in his own garage. 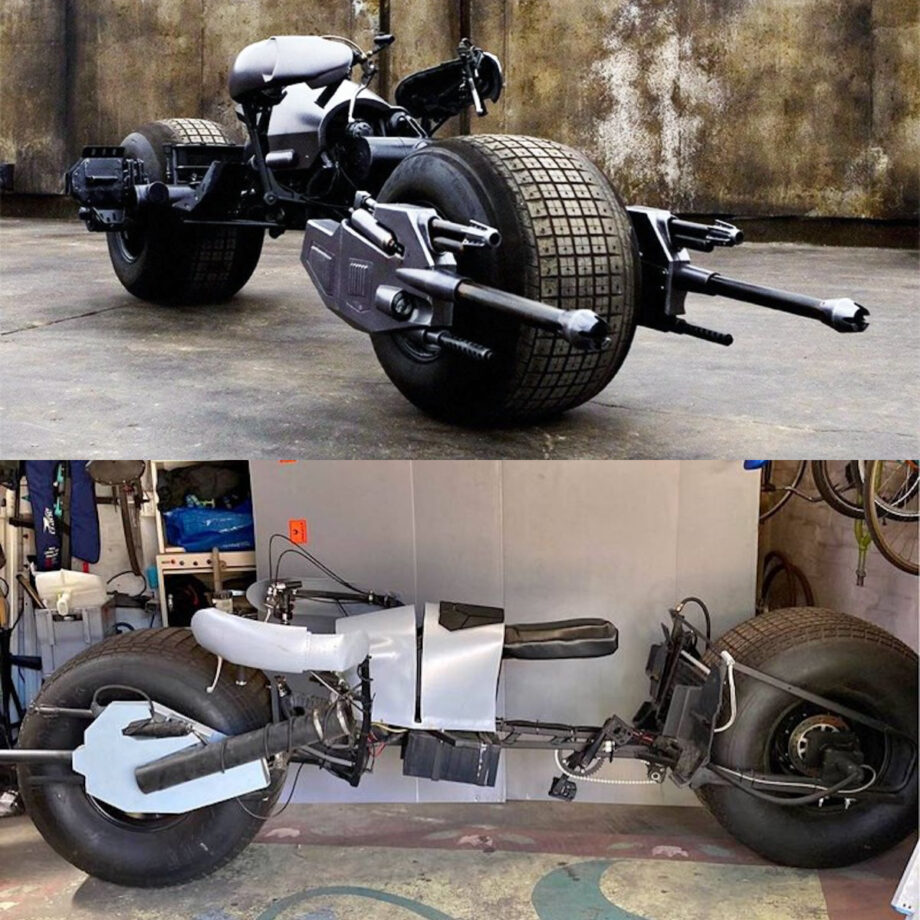 The Batpod from the Hollywood film… And the ‘Batpod’ from the North Melbourne garage.

The brand of the vehicle hilariously listed as ‘Wayne Enterprises’, our aspiring vigilante says it’s “brilliant for cosplay, display and of course crime-fighting.”

The most impressive part of this bike is that it’s got the same tires as the Tumbler and Batpod from the movie – huge Hoosier Dirt Ovals that must have cost a small fortune. Perhaps that’s why it’s listed on Facebook Marketplace for $8,000 (although the seller is apparently “open to sensible negotiations”).

Unlike the movie bike, which is supposed to be powered by a single-cylinder petrol engine, this ‘Bogan Batcycle’ has a small electric motor, as well as conventional pushbike pedals so it’s able to be used legally on the road. It’s even got fake machine guns on the front – a nice touch.

We’re not quite sure whether this is genius or just questionable. Just imagine rolling up to a comic book convention on one of these… You’d be the coolest Batman there all day for sure.

Now all you need is a cape and a scratchy throat.