The pointy end is full of terrors. From the crippling pressure to make the most of it to being driven mad by your valet’s attention, first-class can (sometimes) be more stressful than business.

Unless you’re flying Air France, however, in which case passengers will – apparently – do anything to avoid the airline’s “abysmal” business class offering.

Enter: a hilarious open letter from James Asquith, the Guinness World Record holder for being the youngest male to visit all 196 countries, a bestselling author, and a frequent first and business class flyer.

Asquith on Wednesday took issue with Air France allegedly selling first class “fake fares” to stimulate demand, then downgrading those who bought them to business. Asquith claims this is not the first time during the pandemic they have done this, and they “have a history of doing this for years.” 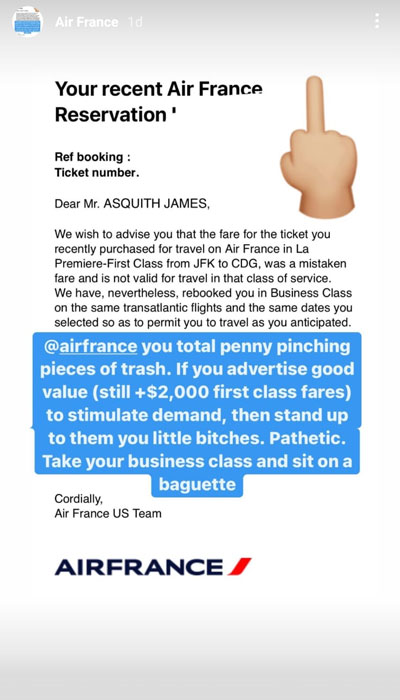 Asquith purchased a first class fare, but was downgraded to business class.

Asquith told DMARGE this penny-pinching tactic does happen “to smaller degrees” across the industry, but “no one is anywhere near as bad at this practice as Air France.”

“Last year CX [Cathay Pacific] had ‘mistake fares’ and honoured them all. Air France… doesn’t. Goodness for if the unwashed peasants like myself were to sit in their carpentry shop built ‘la premiere’ first class seats, and my derriere was to be sat in the same place as the Renault CEO.”

“BA, Lufthansa and American Airlines have all had similar deals for First Class recently,” Asquith added.

DMARGE has reached out to Air France to seek a response, but is yet to get through. In the meantime, we urge you to read the full open letter (see: Asquith’s Instagram post above) or the abridged version we have included below.

I feel the need to write an open letter to Air France after your airline basically ran away and hid from tickets you sold to many passengers – very akin to Napolean in the battle of Waterloo in 1815.

Just to introduce myself, my name is James, and I’m just a guy that flies quite a bit. I travel with a mini stuffed koala bear called Tony (he’s kind of a big deal) and he’s into the finer things in life, unlike myself who is a bit of a peasant really.

I digress. A while later, after convincing Tony that Air France first class has a curtain divider akin to an IKEA shower curtain, and a few mid to average fine wines onboard, he came round to the idea… Regardless we passed over our hard earned $2,200 to book an Air France ticket, which considering the current awful situation for aviation, one would expect that is great revenue for Air France, potentially keeping more staff employed.

Now, again, I’m a peasant and have flown perhaps over 1,000 economy flights in my lifetime, on all sorts of airlines. I know luxury items are quite the ‘thing’ in France, but to be honest, I’m very un-materialistic and simply occassionally like to fly in a nice seat.

Therefore, I don’t mean to sound ungrateful, but your business class cabin sucks. It’s truly abysmal. I would indeed rather flush my head down a toilet than fly Air France business class (and you don’t even want to know what Tony said). You can therefore imagine my dismay when you send an email downgrading all the tickets because of your ‘mistake fare.’ This is not the first time you have done this to me during Covid… 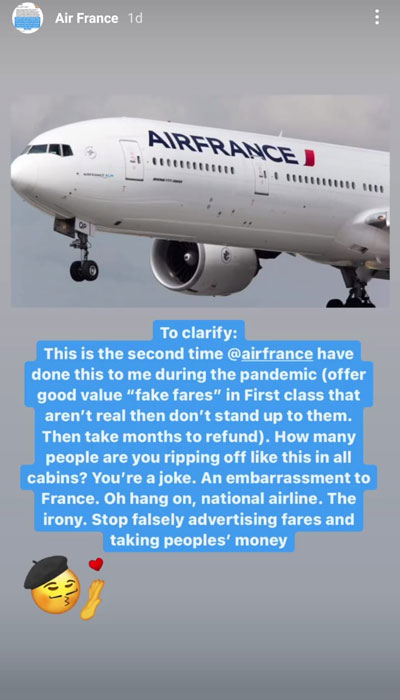 …not only have you done it to me several times, but many other people too. I really don’t care too much about myself or flying Air France, but employees need support from people, why are you trying your hardest to antagonise paying customers. How many people have you done this to? 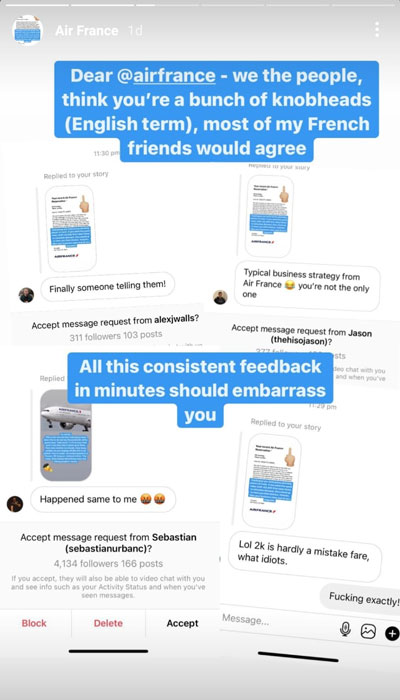 Furthermore, under EC261, you are entitled to pay all these downgraded passengers compensation, not just tell them you have downgraded them and expect them to feel grateful, so please, for goodness sake, stop ripping off people supporting your airline in tough times.

Now, I have a solution regarding my ticket. I was once quoted in the media as saying: ‘I would rather get waterboarded (again) than fly on Air France’ – yet here we are again. Being a bit of a sadist, here’s my proposal to you: downgrade me yet AGAIN, into economy, and donate 10,000 baguettes (or the equivalent, which at €0.90 a baguette on average I calculate to be €9,000, to the humanitarian food crisis in Yemen). This way it will be part me and part you contributing to a good cause. This is Air France’s chance to shine, just how Napolean couldn’t.

The cursing from Tony as I write this is ridiculous, the thought of Air France economy is palpably nauseating to him, but I’m happy to do it for a good cause.

I will even wear a French beret and striped shirt, whilst walking around with a little French flag to plug the world’s 80th best airline, whilst singing Joe Le Taxi and randomly belting out Vive La France.

His chances of success? When DMARGE reached out to Asquith, he said, “I would estimate there is about a crumb of a baguette’s chance they come good on it.”