Browse through the Instagram feed of Sydney’s Figure Eight Rock Pools and you’ll find photos so ‘wholesome’ it’s sickening. Many people go there ironically, of course. Some go for exercise. But the vast majority go there for one reason – social media steeze – and I won’t lie, I was one of them.

After a couple of botched attempts to organise a group, my thinly veiled attempt to get a ‘squad’ together for my own selfish aims came to fruition, with a grand total of 7 of the 10 invitees confirming their attendance. Leaving Sydney’s Northern Beaches at the optimistic hour of 10am, we swept through Cronulla and down towards Sydney’s Royal National Park.

We payed the toll, ($12, cash only) and navigated the winding road down to Garie Beach, where we parked. Arrival time? 12pm.

The Figure Eight Pool is “located on a dangerous rock shelf in Sydney’s Royal National Park near Burning Palms Beach,” The NSW National Parks & Wildlife Service website states. To get there you hike in from Garie beach, which takes about 2-2.5 hours (each way).

This means you’re in for a 9km round trip on a narrow, sometimes slippery, track, which normally involves about 5 hours of walking (all up). 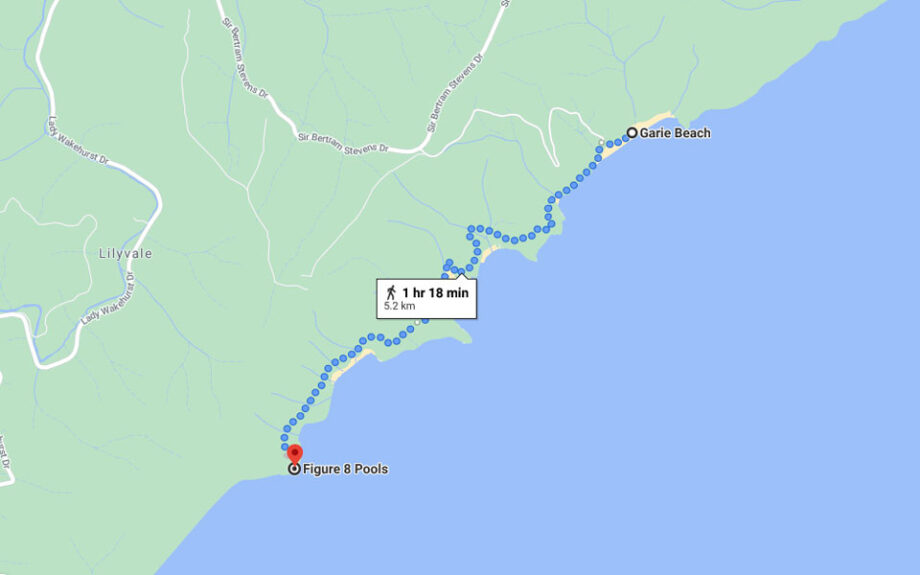 We set off around 12:30pm, and arrived at the rock pools at around 3:30pm. It was during the walk that minor disaster after disaster set in. First: the flies. My back was covered in them. As was my backpack. Not the worst thing in the world: sure. But as somewhat that gives Uber drivers a negative rating if they don’t offer me ‘air-condition crisp’ mints, I was not impressed.

Next was the campsite at North Era, which was rudely empty after the national park booking application had told us it was full (we would otherwise have spent the night there). Finally, we fought our way through the Burning Palms undergrowth (you see where it gets its name: go there on a hot day and you could be mistaken for thinking you’re in Bali) and arrived at the pools. All was good until we realised… they weren’t there.

Either the Geological Gods had reached down and filled them in, or we had gone blind. Cutting a long story (and a bunch of sketchy ‘maybe it’s this one next to the edge here’ moments) we concluded we still had another kilometer or so of walking to go – we had to round a corner and keep scrambling.

Things were once again straightforward until we arrived at the pools. Even though we had arrived at low tide (at high tide the pools are invisible, submerged beneath the waves), the size of the swell meant the pools were still dangerous to enter. 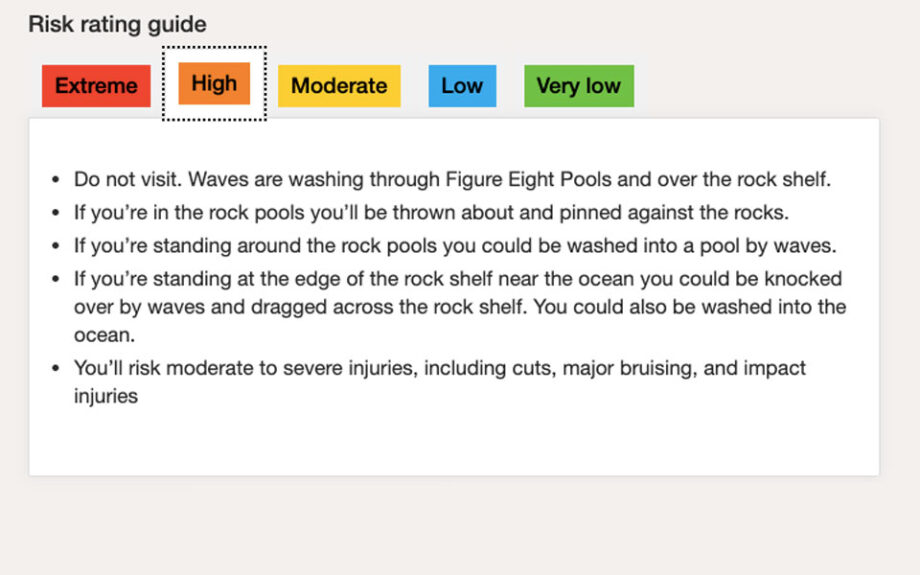 Risk Rating Guide, Sydney National Parks – an essential resource to check (and listen to) when planning your trip.

Suffice to say, we jumped straight into the pools, thinking we had planned our trip to perfection, and that the dead low tide would enable us to arrogantly avoid the waves which the National Park website said were making conditions treacherous that day.

After mucking around for a little bit, our bags, towels, lunch, phones and electronic car keys were duly drenched by a random wave a bit bigger than the rest, which crashed through the edge of the rock shelf and flowed all the way through the pools.

Fortunately, no one was hurt or sucked into the ocean (as has happened to other Figure 8 Pool goers in the past). Unfortunately, our Instagram photos hardly justify the risk we took, in a location only accessible for emergency services by helicopter, and where there is little to no phone reception… and where there is no canteen.

Also: a quick look at the current trending ‘top posts’ under the Instagram ‘figure8pools’ hashtag and geotag, and it becomes clear my Instagram skills are also something of a disaster too.

While some users can be seen diving into the pools with finesse, my attempt to emulate their feats was met with nothing other than anguish (and skewed framing). 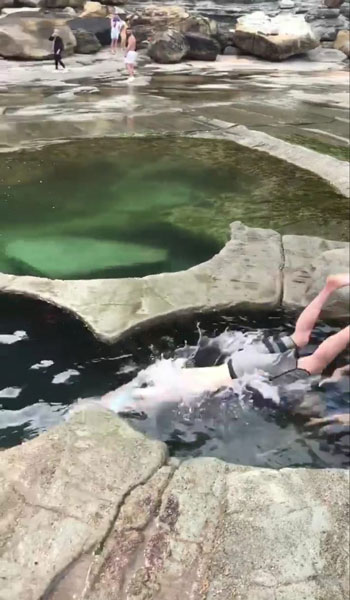 Our group shots didn’t fare much better either. While Instagram’s Top Posts feature squads looking casually out into the distance…

… ours were either marred by high jinks… 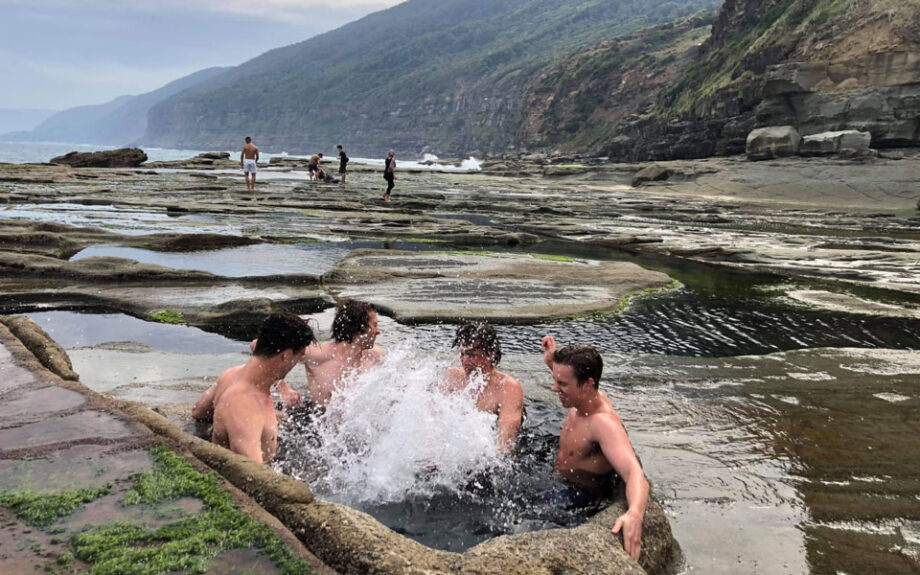 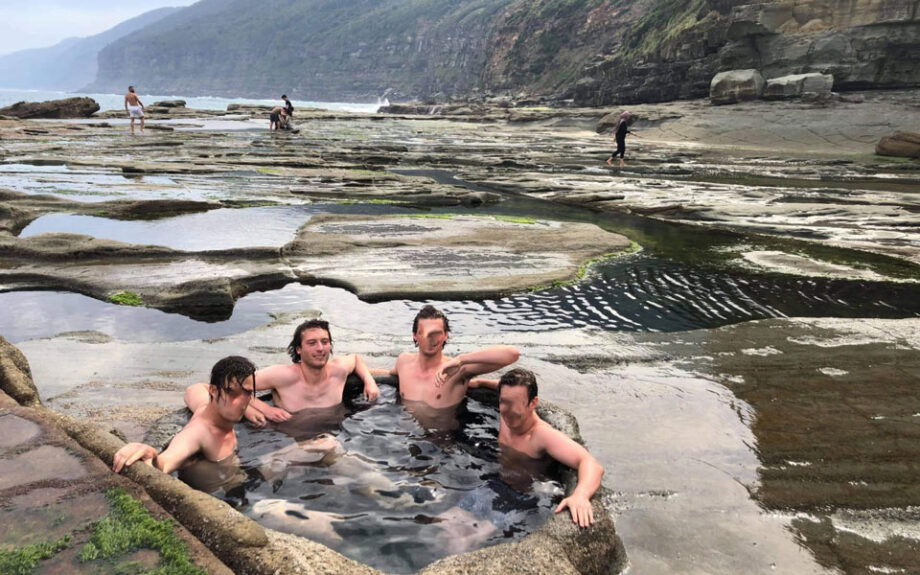 Finally, when it comes to ‘romantic’ couple photos, while other Instagram users manage to make their outing look cute…

… and far removed from the world…

… my photos all have either strangers (or a friend’s backside) popping up in the background. 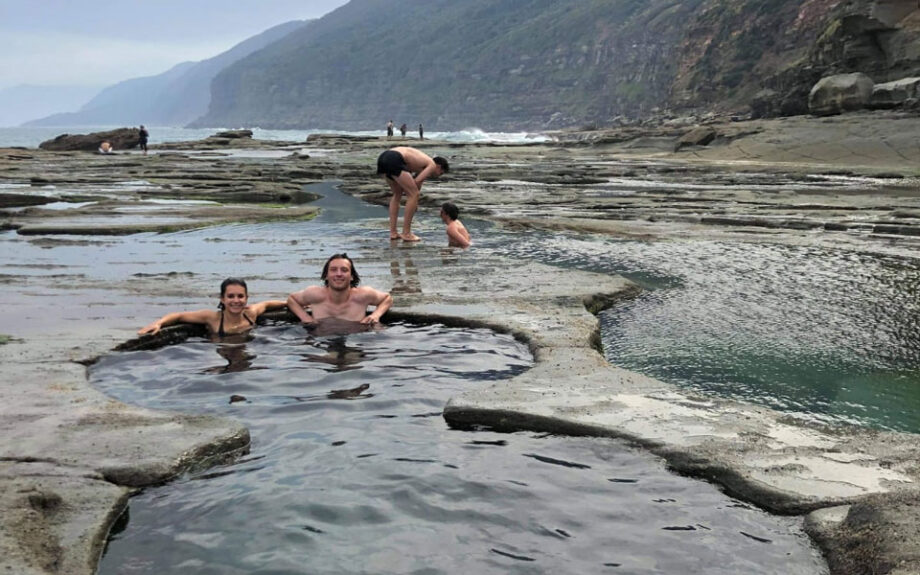 On a positive note: it was nowhere near as humiliating as the experience I endured when attempting the most cliche Instagram move ever in Bali.